As we have seen calculating changes of pH of the buffer solution after adding strong acid or strong base, not all buffers are equal - depending on their composition some are more resistant to the added acid/base, some less resistant. Parameter that describes buffer resistance to pH changes quantitatively is called a buffer capacity. There are many ways of defining the buffer capacity, we will use the definition that most closely follows intuition - the buffer capacity should be larger for solution in which pH change is smaller after addition of acid/base, it should not depend on whether we are adding acid or base, and should be not a function of the amount of acid/base added, but rather should describe pH change in response to infinitesimally small amount of acid/base added. Thus it is best defined as a first derivative of n with regard to pH:

It can be shown (see buffer capacity discussion in pH lectures, where the formula is derived) that buffer capacity of a solution containing several buffering agents, each described by Cbuff concentration and Ka dissociation constant, is

Note, that even if the solution doesn't contain a buffer, for low and high pH it will have a high buffer capacity - while it may sound strange, it is perfectly correct. Low pH (or high pH) mean high concentration of a strong acid (base) - and such solution is quite resistant to pH changes (try to calculate by how much pH of the 1 L of 0.1 M HCl solution changes after adding 0.001 moles of a strong base - you don't need pKa for that, just stoichiometry of the neutralization and pH definition). For 0.1 M acetic buffer buffer capacity curve looks like that: 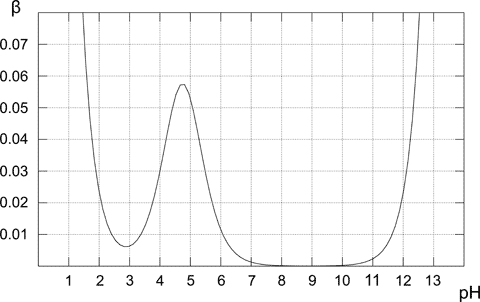 Note, that buffer capacity curves calculated and displayed by the Buffer Maker, usually don't cover whole pH range. That's because buffer capacity plot is calculated only for buffers that can be prepared from the chosen reagents, and possible pH range is usually limited to just several pH units.

All these numbers are only approximate and were calculated using information about weak acids/bases present or required for the solution preparation: