I wonder why I have never thought about using buffer capacity when selecting my buffers. Could be it is too hard to calculate by hand, but what the heck, we have computers and 21st century!

Buffer Maker buffer calculator is the ultimate program for fast and easy buffer design, with a built in editable buffer database, ability to prepare buffers from any reasonably selected combination of reagents, pH calculator and a friendly user interface. 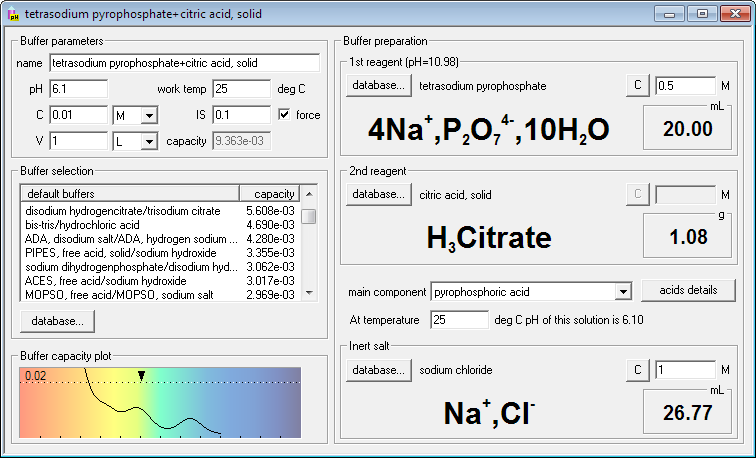 With Buffer Maker you can:

The same pH calculation engine allows calculation of pH of virtually any mixture of acids and bases, weak and strong.

In the buffer calculator each buffer is a mixture of two reagents. The reagent is something that you can have standing in the bottle on the shelf - it can be 1M acetic acid solution, solid potassium sodium tartrate, salts of weak acids and weak bases, like ammonium hydrogen phosphate (solid or dissolved) or even buffer solution - for example pH=5.00 acetate buffer. When you enter the required pH Buffer Maker buffer calculator will - whenever possible - calculate how much of both reagents have to be used to prepare solution.

Buffer Maker buffer calculator needs any PC class computer with properly running Windows - any version published after 1995 should do.